HOME >
Warning: Attempt to read property "name" on bool in /www/bjorg_674/public/wp-content/themes/defaultTheme/template-sidebar.php on line 28 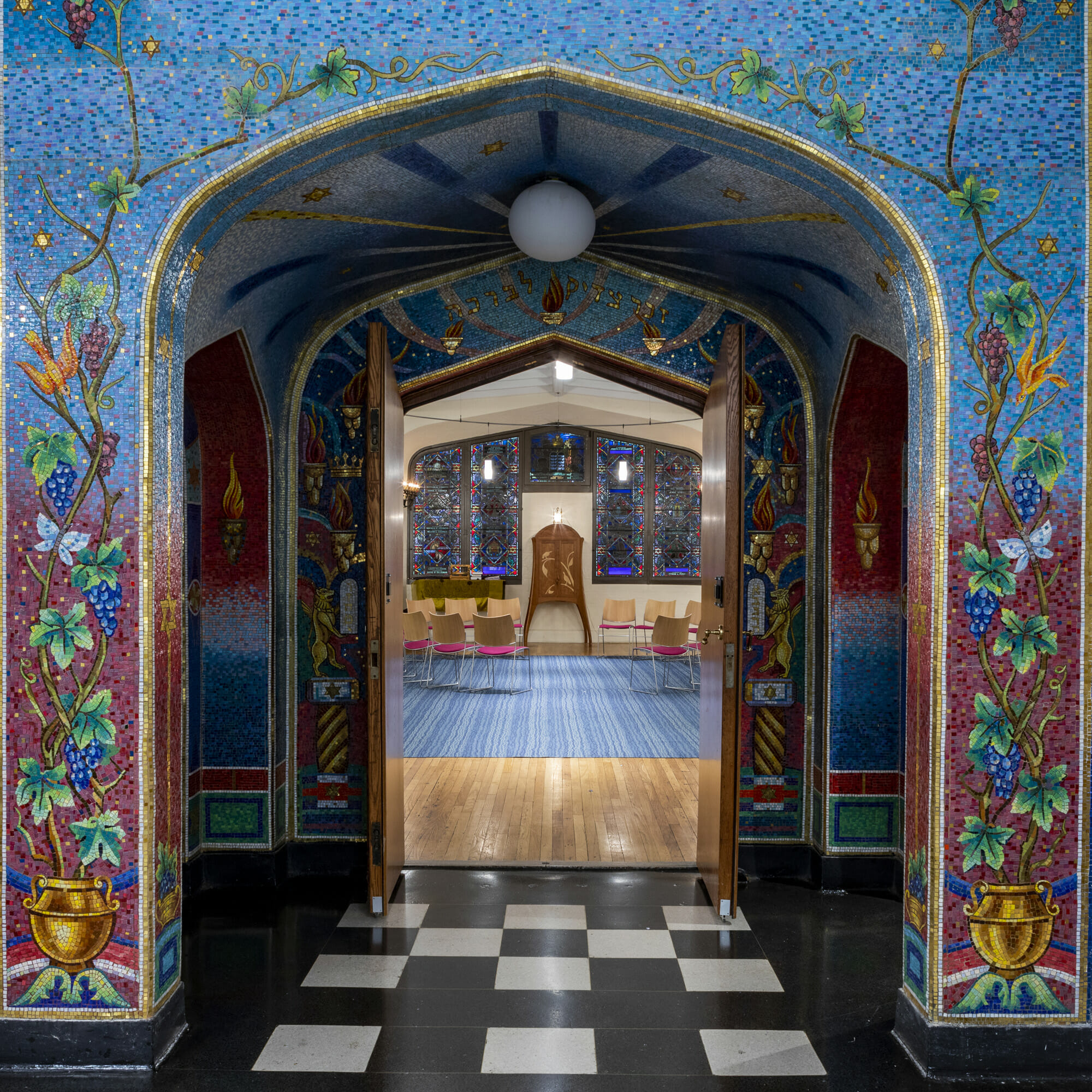 Founded in 1825, our BJ campus includes the Sanctuary building on 257 West 88th Street and the Community House on 270 West 89th Street, which are connected by a beautiful brand new link. All spaces are fully accessible.

The 88th Street Sanctuary building, in the Moorish Revival style, with elaborate, colorful mosaics and painting, was dedicated in 1918. The architects, Henry B. Herts Jr. and Walter S. Schneider, endeavored to embody in the structure the ancient spirit of Semitic art as found in the ornament of building ruins and graveyards in Israel, Egypt, and Spain. The exterior features an ornately carved main portal and weathered stone in a rich buff tone. The lobby design introduced a touch of blue in the marble base and in the glazed tiles bordering the floor. At either end of the lobby, stairs rise to the balcony and descend to the lower level, which originally held the Hebrew School.

The square main sanctuary, with a seating capacity of about 1,100, is intricately and richly ornamented in tones of blue, buff, red, and gold that freely interpret Coptic design with suggestions of Moorish and Persian sources. The rose window in the main portal is of just two colors, blue and golden yellow. The original side windows, which used the same color scheme, were replaced over the years by stained-glass panels representing Jewish stories and dedications in memory of B’nai Jeshurun members. The octagonal ceiling was perforated by a number of segmental arches and featured elaborate stalactites that were thrown into high relief by concealed lighting.

In May 1991, just a few years after Rabbi Meyer came to rejuvenate the congregation, the roof of the 88th Street building collapsed, bringing half a ton of plaster from the original ceiling onto the bimah and surrounding area. The timing was fortunate, for no one was in the building, and what could have been a major disaster was avoided. In 1996, renovations and repairs to the BJ sanctuary were completed, and the synagogue was rededicated. The original pews were removed to allow for multiple uses of the space, and a new ceiling with a gridlike structure that incorporates a programmable lighting system was installed. This new design maintains the feeling of the magnificent original while maximizing the flexibility of the space.

In 2010, BJ purchased the building directly behind it on 89th Street. This building, which was dedicated in 1928 as the B’nai Jeshurun Community Center, was sold to the Abraham Joshua Heschel School in the early 1980s. It originally included an auditorium, ballroom, chapel, classrooms, clubrooms, a women’s salon, and a library. The landmark reacquisition of the 89th Street building now allows BJ members and guests to pray and celebrate together on Shabbat.

Please click here to learn about renting our spaces.

Sanders-Gardner Teen Lounge was dedicated in memory of Katie Sanders and Lawrence Gardner on Sunday, September 15, 2019, honoring their legacy and their commitment to our youth. The space is home to the Teen Program.

Rabbi Rachel Cowan Chapel was dedicated in memory of Rabbi Rachel Cowan on Sunday, May 19, 2019, corresponding to the 14th day of Iyar 5779, the 29th Day of the Omer. The chapel is a place of prayer, meditation, study, reflection, community, and celebration, as we dedicate ourselves to continuing and expanding Rachel’s remarkable legacy. 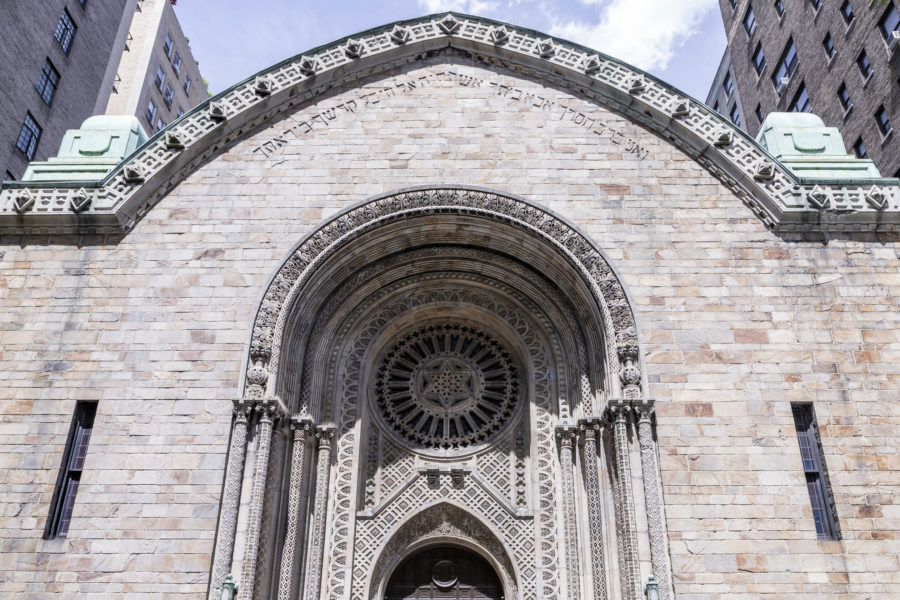 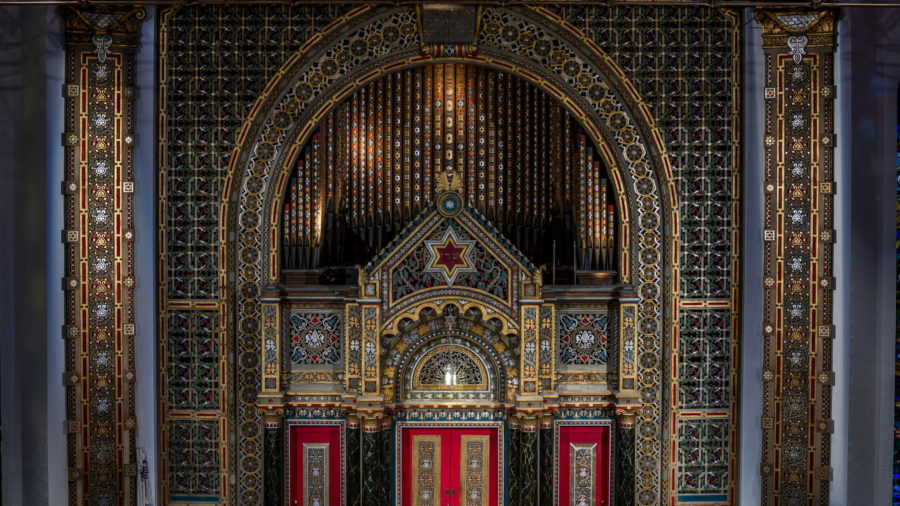 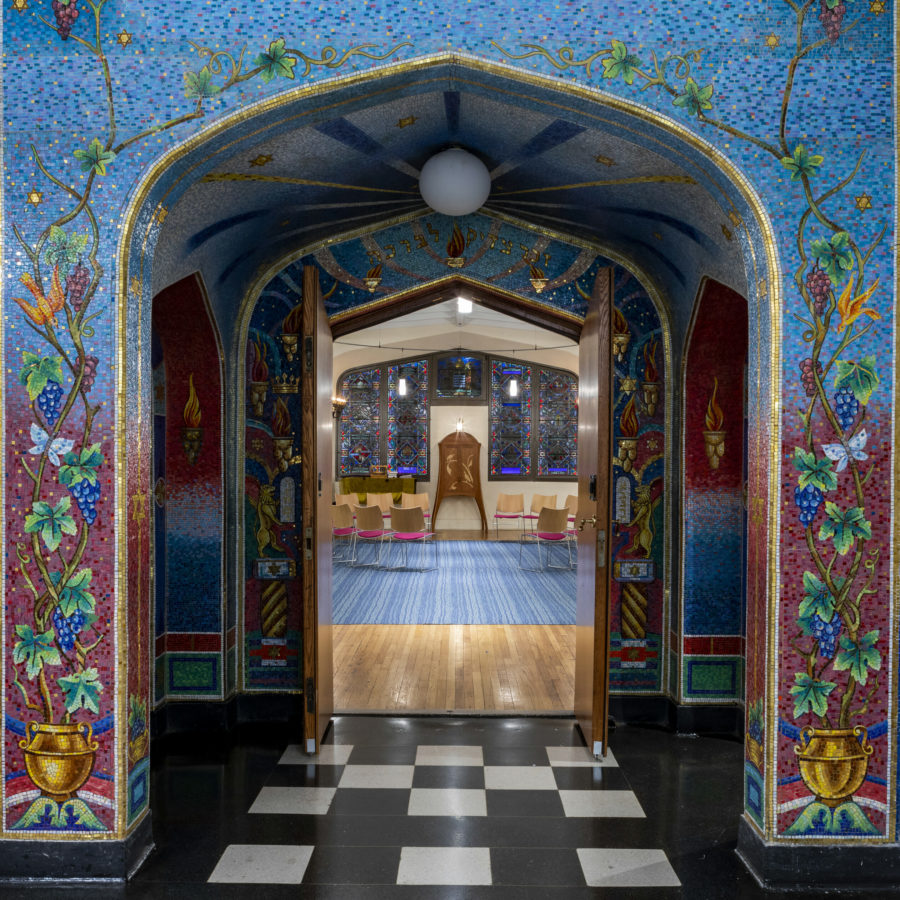 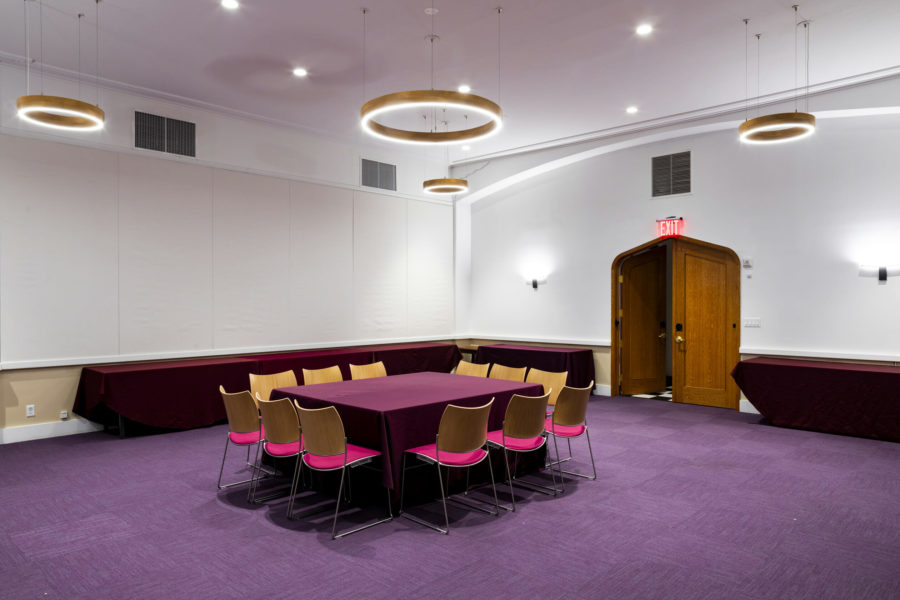 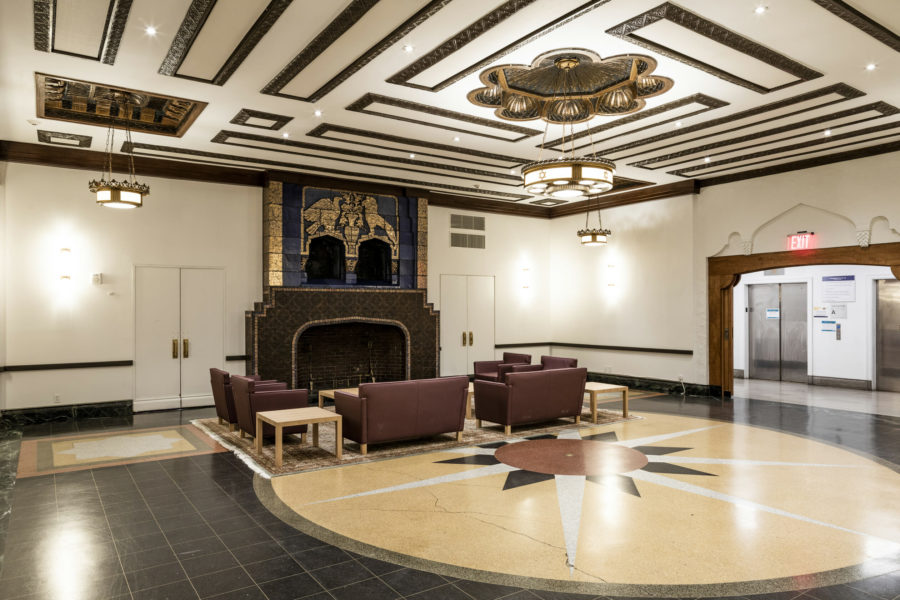 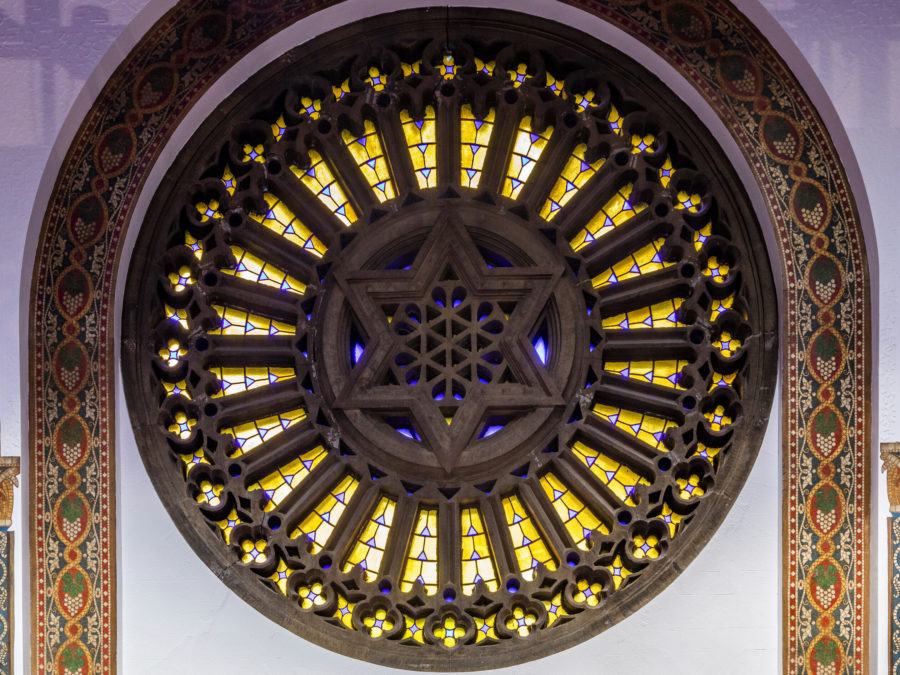 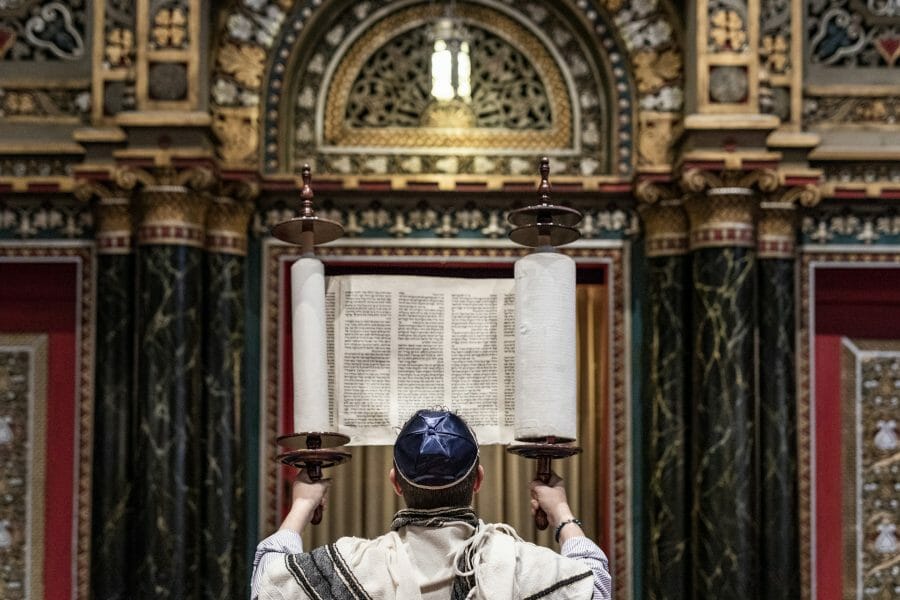 Warning: foreach() argument must be of type array|object, bool given in /www/bjorg_674/public/wp-content/themes/defaultTheme/template-sidebar.php on line 117