The Price of Whiteness: Jews, Race and American Identity 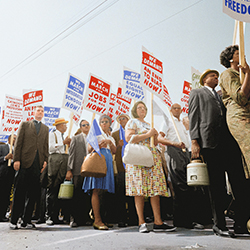 What has it meant to be Jewish in a nation defined by the categories of Black and white? Are American Jews with light skin (including most Ashkenazi Jews of European descent) members of a vulnerable minority group or part of the privileged white majority? Or both? This discussion, hosted by The Joseph Stern Center for Social Responsibility and B’nai Jeshurun, will examine the uneasy place Jews have held in America’s racial culture since the late nineteenth century, and also ask what role they have to play in today’s movements for racial justice. The conversation will be led by Eric Goldstein, Ph.D., and will focus on the experience of Jews whom America’s racial culture has come to identify as white.

Eric Goldstein is the Judith London Evans director of the Tam Institute for Jewish Studies at Emory University, where he is also associate professor of history and Jewish studies. He is the author of The Price of Whiteness: Jews, Race, and American Identity (Princeton University Press, 2006) and, with Deborah R. Weiner, On Middle Ground: A History of the Jews of Baltimore (Johns Hopkins Press, 2018). He is a former editor of the quarterly scholarly journal American Jewish History.

Cosponsored by The Center for Jewish Living.